The Internet seems to be full of articles and advice for the amplified harp player, but there is a real dearth of information on micing the acoustic harmonica. In this column I'd like to pass along a few tips and tricks I learned the hard way, in hopes of making things a bit easier for other acoustic players.

Of course none of us really play "acoustically" if we use any sound re-enforcement at all -- but for the purposes of this column we will define acoustic players as those who don’t cup a hand-held mic or play through an guitar amplifier, but who still wish to have their playing made louder in a clear, clean fashion.

When talking about micing the acoustic harp it’s necessary to split the discussion into two very different aspects: live performance and recording. In order to achieve optimal results you will want to use very different microphones for these different applications. So first let's take a look at:

Live Performance: The best option of course is to use a good vocal mic played (from about 3 inches away) through a quality PA system (not through an amp.) In general you will probably have to goose the EQ on your channel so that you have a little more bass, less highs, and some reverb. (These settings will vary of course, depending on the configuration and acoustics of the room. Some rooms have so much natural echo that you won't want any reverb at all. But then, that's what sound checks are for.)

With the proper PA settings, a good quality vocal mic should present no feedback problem unless your speakers are aimed back at you or your monitors are too loud. I've found that if I'm feeding back I'm probably either playing too close to the mic, or the PA is simply too loud. If I'm 3 inches away from the mic and still feeding back, it's time change the speaker placement and/or turn down (or re-position) the monitor(s.)

Aside from feedback, distortion can also be a factor. This is usually a result of PA-head (or mixing board) settings. Knobs often have a way of getting tweaked over time, and when I hear distortion I most often notice that my individual channel has gradually crept up to 8 or 9 while the overall volume is only at 3 or 4. This causes distortion, and the obvious fix is to turn down your individual channel to maybe 6, while turning up the PAs overall volume. Net result: you'll be just as loud as you were before, but you won't be breaking up.

Here are a few mic options for live performance. Please keep in mind these recommendations are only one harp player's opinion, and your mileage may vary. If you already have a mic that you love, by all means stick with it.

The old standbys are Shure SM57s and 58s. These are industry standard mics and true workhorses. (Technically the blunt-end 57 is supposed to be more for an instrument and the ball-end 58 more for a vocalist, but they both work well for either application.) Many folks swear by them, and while they're not sexy, they do get the job done. They are also inexpensive (about $100 if you shop around.) If you are purchasing your first "acoustic" mic, please do yourself the favor of buying at least a SM57 or 58. Don’t be tempted to even think about buying anything cheaper -- the cheaper mics all sound horrible, and you'll just have to upgrade very soon.

If your PA accepts high impedance phone jacks, rather than using a low impedance Shure (like an SM57 or 58,) you might try to locate a Shure PE54. Believe it or not, these are very nice mics for gigs! They don't make them anymore, but old ones pop up pretty regularly in stores and on eBay. I used one of these in performance for over 22 years before finally upgrading a few years ago. As you can imagine, over the course of 22 years of gigging it was dropped, run over, spat upon, fallen in snow, filled with dirt, soaked with beer, and generally tortured in all manner of inhumane ways, yet it kept on ticking and sounded fine. In addition I had the habit of turning it off and on after every song so that I could talk to Kenny... (Hmmm... let's see... 3,500 gigs, times maybe 30 songs per gig, means that I flipped that off/on switch over 200,000 times and it never broke.) This mic finally met its end only when it fell, face first, off a very high stage and smacked directly into a huge granite boulder. It was an old pal and we gave it a State Funeral.

Faced with the necessity to upgrade, I then settled on two different mics -- one for very quiet concerts and another for noisy (bar) gigs. For the concerts I opted for an AKG C535EB. A bit pricey (lists at about $370 but can be had much cheaper,) this is an outstanding mic and is used as a vocal mic by K.D. Lang and Sting, amongst others. It is loud, clear, excellent sounding and never seems to feed back. Great frequency response! But (and this is a big but) it's a condenser mic requiring phantom-power, which means there's no off/on switch; and you can't install an off/on switch because it would make a very loud snap noise every time it was turned off and on, due to the actual flow of power through the line. So, since it's "on" all the time, and since it is very omni-directional, it picks up all kinds of ambient sounds -- crowd noise, belching, motorcycles driving by, Kenny and I discussing the girl in the third row, etc. This means that I can't use it at noisy gigs, but it works beautifully at quiet concerts. And it's also one of the best sounding acoustic guitar mics I've heard (outside of Neumanns or some other $2000+ tube mics.) Not a bad mic for recording, either.

For the every-day noisier gigs I'm now using a Shure 545SD. In many ways this is similar to my old PE54 -- looks the same, off/on switch, etc -- but it's actually cleaner, clearer and hotter than the PE54. Acoustic players often overlook this mic because they know that Paul Butterfield played through one, and therefore they assume that it’s strictly a mic for electric players. Not so. Paul used one with a huge built-in pistol-grip and of course he cupped it and ran it through a guitar amp (with effects,) so his tone is no real indication of how this thing sounds acoustically. It's actually very clean when played from a few inches away, and good for vocals as well. I tend to think of it as a SM57 with an off/on switch, only I like it better. They are likewise only about $100 and will last for decades.

Of course lots of other good vocal mics will do the job: Sennheisers, other AKGs, Electrovoices, the list goes on and on. Over the span of 40 years I've tried most all of 'em, but those are the ones I'd humbly recommend for clear, clean live performance.

Recording: Recording is a completely different arena and must be thought of as such. What follows does not apply to home recording -- rather it addresses situations one might encounter in a professional recording studio.

The sad truth of the matter is that even if you are fortunate enough to be able to use a great mic, get the EQ and reverb right and play a good track, often times the end result will be unrecognizable due to the (producer’s) addition of chorus, flanging, delay and other effects. What's more, with ProTools it's a simple task to slice and dice your track until it no longer musically resembles what you played. This is the nature of recording in the 21st Century -- rather than a musician’s medium it has become a producer’s medium and we find ourselves at their mercy. Hopefully they have enough sense not to butcher us, but you never know - it’s their money, and ultimately that makes them the creative arbiters.

Having said that, I always still try to at least start out on the right foot. Usually I will ask for the best tube vocal mic in the house. If I’m lucky, this may be a Neumann (U47, U67 or U87,) or an AKG (414 or C12.) If I'm playing a lower key harp (G through about C,) probably no EQing will be necessary -- just some reverb. If the song calls for a higher key harp (D through F#,) generally I will ask the engineer to attenuate some of the highs. For tunes that require the highest harps (F or F#,) my favorite mic is a Royer R-121 ribbon mic, as it tends to emphasize the lows.

At this point I could launch into a lengthy dissertation about studio mics and recording techniques for acoustic harp, but in fact the consummate article on the topic has already been written; anyone interested should proceed to "The Taming of the Shrill," a wonderful article by Brian Knave that appeared a few years ago in Electronic Musician Magazine.

Once you get through that article you’ll probably know more than I do about micing the acoustic harp. In any event there are a lot of great mics out there, and new products continue to appear every day. So it is possible to tame the beast!

Best wishes to all, cheers and happy harpin', 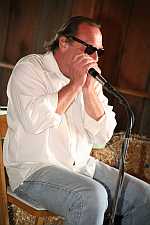 Born in Los Angeles on Sonny Terry's birthday (October 24,) Tom Ball began playing guitar at the age of eleven and took up harmonica three years later. A teenage member of the Yerba Buena Blues Band in the mid-1960's, he played Love-Ins and Sunset Strip nightclubs before leaving the country for most of the '70s. In 1979 he came back to the U.S. and teamed up with guitarist Kenny Sultan -- a partnership that still flourishes today and has resulted in eight duo CDs (most with Flying Fish/Rounder) and countless concerts, festivals and tours all over the world.

In addition to working with Sultan, Tom has also performed and sung on scores of TV shows, films and commercials, has appeared as a sideman on nearly 200 CD releases, recorded three solo guitar CDs and written five instructional books and a couple of novels.

The Tom Ball & Kenny Sultan duo has appeared on television internationally, played for audiences of 300 million via Voice Of America, were featured on the "Levi's 501 Blues" commercials and are frequent guests of National Public Radio. Their music from the film "Over The Edge" won them the prestigeous Telly Award in 1994, and they were the only musical act in America to play all four venues of the 1984 Olympic Games.

It's not hard to see why Tom Ball has been on the cover of both the American Harmonica Newsmagazine and Harmonica World, why Blues Revue called his playing "stupendous," and why Sound Choice wrote, "The best acoustic blues act going, bar none!"

www.tomball.us Tom Ball's personal site. One of the better harmonica sites on the web

http://www.myspace.com/tomballguitar In addition to harmonica, Tom Ball is a fine guitar player, his MySpace page shows why

www.myspace.com/tomballkennysultan The MySpace page for Tom Ball and Kenny Sultan